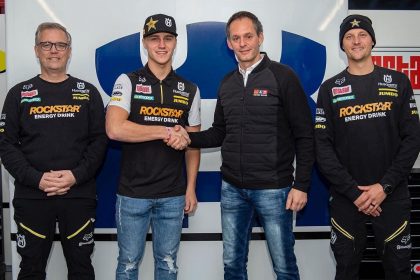 Just one year after placing third in his debut season in the hotly contested EMX250 series in 2018, Roan claimed the title in 2019 after a season-long battle for the championship. Stepping up to the MX2 World Championship for 2020, the now 21-year-old immediately impressed with three overall podium results from the first five rounds. Two further top-three finishes followed later in the year, with the Dutchman securing a maiden race victory and claiming second overall at the MXGP of Lommel. Roan would ultimately place seventh in the final standings.

Bringing everything he learned in his rookie MX2 season into 2021, Roan enjoyed another promising campaign start, claiming three third-place moto finishes to lie fifth in the series standings after the first four rounds. Frustratingly, a broken scaphoid sustained following a crash at the MXGP of Czech Republic prevented him from delivering what was set to be his breakout season in the MX2 World Championship.

Fully healed and excited to begin riding his new FC 250, Roan, alongside new teammate Kay de Wolf, will soon begin testing in readiness for the opening round of the 2022 MX2 World Championship.

Roan Van De Moosdijk: “I’m so pleased to be joining the Rockstar Energy Husqvarna Factory Racing MX2 team, it’s really a very special moment in my career. This season has been tough, but I’m putting that behind me and looking forward to working with the team and having Kay as my new teammate. I have a really good feeling about things, and I know that at the start of this season things were going well, and that my speed and fitness was where it needed to be to challenge for the podium. I’ll have the best bike and the best support next year, so I just want to keep working and improving through the winter and get back to where I was and then give 2022 everything I have. Finally, it looks like the season will be back to normal, and I’m really looking forward to that. I want to say thanks to everyone that has made this happen – I can’t wait to get onto my new bike and to start our winter testing and training.”

Rasmus Jorgensen – Rockstar Energy Husqvarna Factory Racing MX2 Team Manager: “We’re thrilled to have Roan in our team and can’t wait to get him settled in, and then start working in preparation for 2022. Overall, this year was a very positive season for our team – we want to keep that momentum rolling into 2022 and with Roan racing alongside Kay we believe we have a very strong line-up. At the start of this year Roan was riding so well, he put in some really impressive motos, and really showed what he is capable of. We really believe he’ll be a great fit for our team and at 21 has the right mix of age and experience to excel in MX2. On our bike, with the full technical support we can offer him, he’ll have all that he needs to develop further as a racer. After a short break to rechange the batteries a little after the long season we’ve had, we’ll soon start building towards 2022. We can’t wait to get started.”

Robert Jonas – VP Motorsports Offroad: “Husqvarna Motorcycles is very pleased to be welcoming Roan into the Rockstar Energy Husqvarna Factory Racing MX2 team alongside Kay. The team did a fantastic job this season and is 100% focused on bigger and better results in 2022. Clearly the MX2 World Championship is hugely competitive but Roan, like Kay, has shown that he has the speed and skills to challenge for the podium. That, together with the support and guidance he will receive from both the team and everyone within Motorsports in Austria, will give him all he needs to further develop as a MX2 GP racer with Husqvarna Motorcycles.”